The Freshest Seafood, Amazing Sushi, 52 Beers on Tap and a Whole Lot More.. Seriously! What more could you ask for!

Tune into @FoodNetwork’s #DDD on Friday July 30th at 9:00pm EST to see Lobster Enchiladas and King of the Jungle roll featured on the Food Networks Diners, Drive-Ins and Dives! #DDD, #foodnetwork 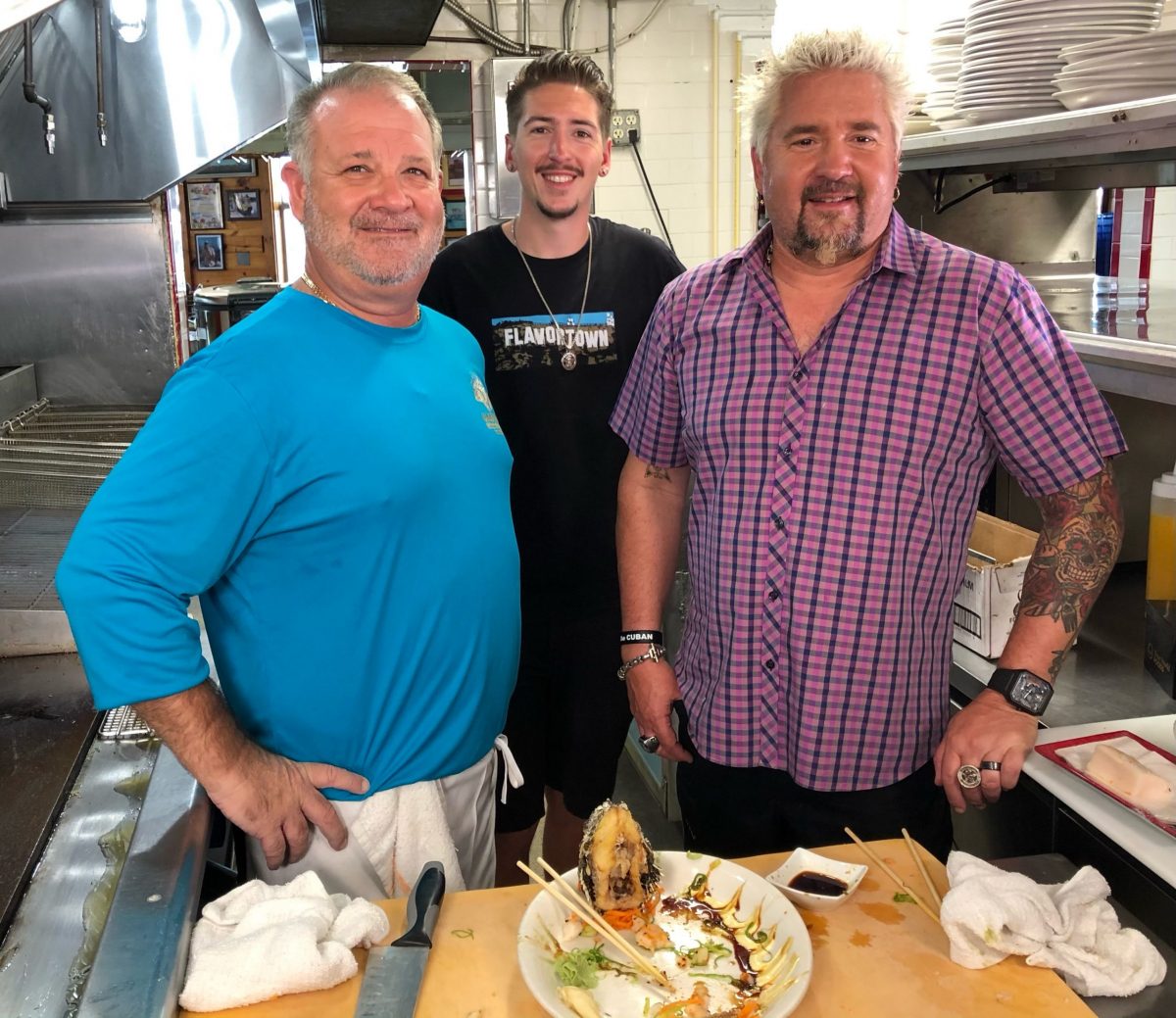 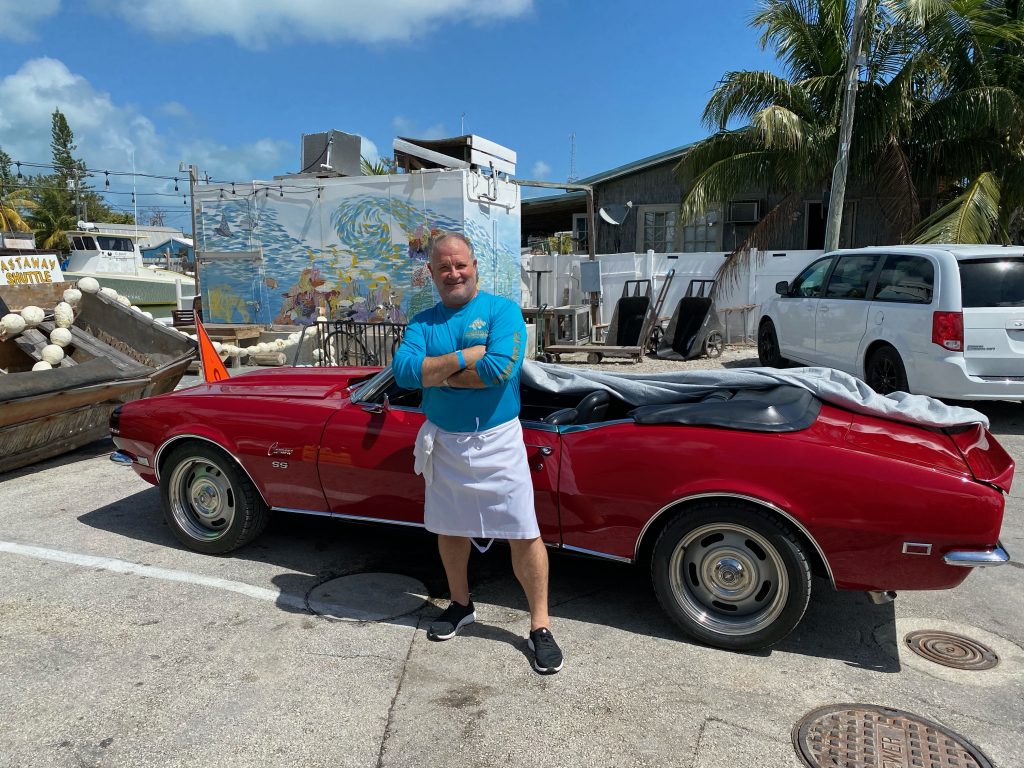 We are closed on Wednesdays

As one of the most popular bars and restaurants in Marathon we encourage you to book your dinner reservations a day two in advance.  We also were recently featured on Guy Fieri’s Diners, Drive-ins and Dives.  We are open for breakfast, lunch and dinner everyday except Wednesdays and accept reservations starting at 4pm. We accept walk-ins anytime.
Additionally we only have 32 beers on tap.  We open for breakfast at 9am on weekdays and 8am on the weekends.

Open for breakfast at 11 am on weekdays, (except on Wednesdays) and 10 am on the weekends. Breakfast is served until 2pm everyday.

Happy hour begins at 2PM and goes until 5:45pm. You must have order placed no later than 5:45pm for happy hour pricing – NO EXCEPTIONS.

Our Menus (Kids Menu & Happy Hour Are The Same)

The Castaway was originally built in 1951 and known for many years as a place to get beer and shrimp steamed in beer.  After all, in 1951 there were many shrimp boats parked a stones throw from the restaurant and if you never met a shrimper, the you probably don’t know it but them boys can drink some beer.

In 1999 John sailed into Marathon, Florida ending a voyage that began in Los Angeles. He bought the restaurant and began a new adventure, oh yeah, he also quit his job, sailed the boat and moved to the fabulous Florida Keys.

Now decades later The Castaway is busy again but with an expanded menu featuring all the S’s. Seafood, Steaks, Sushi, and of course Spirits and as of today now serving 52 BEERS ON TAP.  Seating is indoor and outdoor on the water and service includes breakfast, lunch and dinner 7 days a week.

If you are hungry, or thirsty or want to talk to a Captain about fishing, stop in and see us.  We are located at MM48, at the end of 15th St, Oceanside in Marathon.  Reservations are always accepted and can be made by calling us at 305-743-6247.

We risk everything to bring you fresh fish!

Enjoy some of the best tasting meals in the keys. Check out our menus below and join us for the fun. 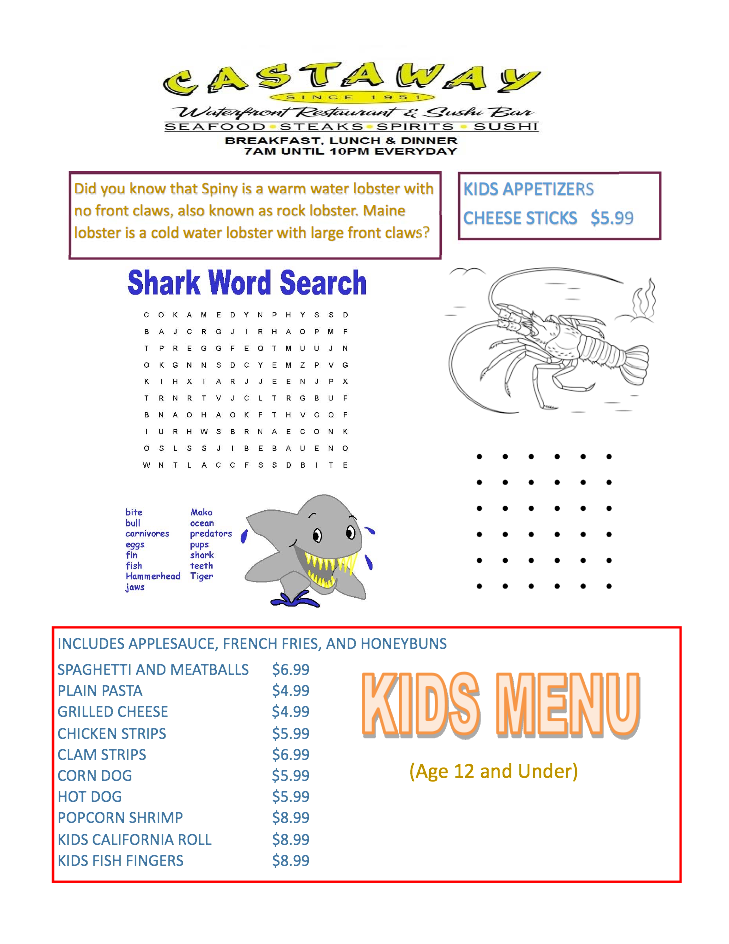 Some of the best sushi in the Florida Keys is right here at Castaway! Our sushi is prepared with the freshest ingredients by great sushi chefs. Check out our extensive sushi menu and stop by to experience it.

The staff here at Castaway enjoy waiting on everyone and by everyone we mean from the locals to vacationers from around the world! Stop by and enjoy our great food and the great people that will wait on you.

Many of our incredible creations can only be found at Castaway. We have amazing chefs and prep staff that go above and beyond when it comes to creating great meals that we are proud to serve.

We pride ourselves in creating great dishes using the freshest ingredients. Our customers come back again and again because they know they will always have a great tasty meal made from fresh ingredients.

Whether you want to sample our popular appetizers or feast on our many large portion dinners you are sure to be happy with your decision. Since the 1950’s Castaway has been helping people make great decisions!

If you’re looking for the best comfort food in the Florida Key look no further than Castaway. Our homestyle creations along with our 54 beers on tap will surely meet everyone’s definition of comfort food.

What People are Saying

“We had two amazing meals here. Killer sushi. The staff, especially Tami, could not have been more kind and welcoming. Saw a bunch of manatees out back, which was really cool. Great food and good vibes.”

“A local Marathon resident recommended Castaway to us…. And we’re glad we went. They ordered the conch fritter appetizer, blackened chicken Caesar salad, snapper sandwich and multiple slices of key lime pie. The food was excellent and came out piping hot.”

“Amazing, love this place. I live in Delaware and I really appreciated the welcome my Mom and I received.. first time to this restaurant and we will be returning for sure. Wanda was our server and what can I say “GREAT “ sums it up…..”

“We’ve eaten at Castaways twice. Once for happy hour, and then for breakfast. Both times the food was very good. Who doesn’t love inexpensive hot wings? Breakfast was also terrific. I recommend their house made sausage patties. Strong coffee!”

Stop by and see why we constantly hear that we have the best happy our on Marathon. Great drink specials, fabulous food specials and an incredible island style atmosphere that we have been perfecting for decades!

Don’t be shy. Let us know if you have any questions!